Madyson Siddall, from Watertown, is about to turn ten. She loves pranks, dogs, and stuffed animals.
But Madyson has had a tough year. 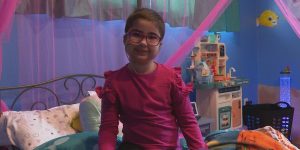 In February 2020, her legs began hurting, and she was feeling tired all the time. One day, while she was playing outside, she collapsed.
“When my husband lifted her, she looked, and I hate this word, she looked dead,” Madyson’s mom, Melissa Gardner, said. “She was barely moving.”
A trip to the emergency room uncovered serious concerns with her blood levels.
“They said her blood counts are two. The normal blood range is ten and up. They said, if you waited one more day, she wouldn’t have made it,” Gardner said.

Madyson was diagnosed with Aplastic Anemia. It’s a rare disease, similar to leukemia.

In the past year, she has had to undergo chemotherapy, steroid treatments, a bone marrow transplant, and countless blood and platelet transfusions.
Most of those treatments were done at a hospital in Boston.
“I was feeling a little sad, because I love New York, and I did want to get out the hospital. I didn’t really get to go out that much,” Madyson said.
Madyson takes seven prescriptions a day, but despite it all, she says she gets through it by being brave.
“It is hard to go through these things, but when I go through them, it’s not that bad. I was very scared and I didn’t want to get them over with because I was too scared to do it, but when I got them over with, it wasn’t that hard,” Madyson said.
She said she made the best of the situation by making friends with her nurses, and planning to buy her dream ride.

“She’s been wanting a motorcycle, so she can ride to school. Of course, I want training wheels with it,” Madyson said.
While Madyson saves up for her motorcycle, her family is facing the costs of her treatments.
“I would probably have to work three jobs to pay for this. Adding up, it’s pretty much a mortgage,” Gardner said.
But you can help. This weekend, there is a virtual benefit for Madyson on Facebook.
“Whatever people donate is such a blessing. But one thing we do appreciate, is prayers,” Gardner said.