NEWBURYPORT — Colton Fontaine was the picture of good health. A standout athlete during his days at Newburyport High, Fontaine went on to enjoy a successful college baseball career at Salem State and now serves as the program’s top assistant coach.

But that all changed in the blink of an eye, and now the 25-year-old finds himself battling a rare blood disease that has already upended his life and could pose significant hurdles in the months to come, both medically and financially.

Last month Fontaine was diagnosed with aplastic anemia, a rare condition that occurs when your body stops producing enough new blood cells. According to the Aplastic Anemia and MDS International Foundation, fewer than 1,000 Americans are diagnosed with the disease each year, and those affected are left fatigued and more prone to infections and uncontrolled bleeding. 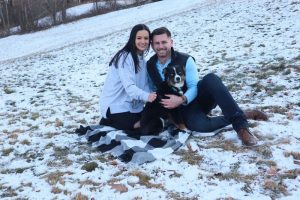 The condition can affect people at any age and is potentially fatal in serious enough cases. The only known treatment is a bone marrow transplant, but while Fontaine seeks out a matching donor he will have to undergo blood transfusions at least three times a week, and afterwards he faces four months of chemotherapy.

Given that Fontaine is likely to incur significant medical bills over the course of his treatment, friends and family have rallied to help raise money so that Fontaine can dedicate his focus on his recovery. A GoFundMe page set up by Salem State baseball coach Al Donovan has already raised more than $15,000, and the group is planning a number of events in the coming months.

“He was in tough shape between the pain, the blood transfusions are six hours, seven hours. As you know medical costs go through the roof,” Donovan said. “He has insurance but it’s not like it’s going to cover everything.”

Fontaine was first diagnosed on Feb. 11 after he noticed that he was suddenly developing bruises all over his body. He went in for a check-up and had his blood drawn, and afterwards he headed home assuming it was nothing serious.

“But when I got home they were like ‘you need to come right back here,’” Fontaine said. “It was a lot of shock and unknown, a million things are rushing through your head.”

Fontaine was transferred to Beth Israel Hospital in Boston and he is now undergoing regular blood transfusions. The hope is that Fontaine will be able to receive a bone marrow transplant from his older brother Brett, and if so the procedure would have a 90% success rate and could be done in a matter of weeks. If Brett is not a match, it would likely take longer to find a donor and the success rate would drop to 65%.

While that process is playing out, Fontaine said he’s focused on staying safe and doing his part through each stage of the treatment process. He added that he’s tremendously grateful to everyone who has stepped up and supported him.

“As soon as this all happened, I have such a great community around me between my Newburyport friends, the Salem State community, all the parents and coaches, so many past families who I’ve gotten close to, my girlfriend Alyssa Drouin,” Fontaine said. “There’s an abundance of ways people have come together and I can’t thank them enough for everything they’ve all done.”

Those who are interested in supporting Fontaine can find his GoFundMe page at: https://gofund.me/a7dc5524.

Prior to his high school graduation in 2013, Colton Fontaine was one of the North Shore’s top baseball players, serving as a three-year varsity starter for Newburyport while helping lead the Clippers to the 2011 Division 3 state championship. Fontaine earned team Rookie of the Year honors as a sophomore that year before earning CAL All-Star as a junior and All-CAL and team MVP as a senior captain. Last year he was selected by the Daily News of Newburyport as a Second Team All-Decade pick for baseball. Once at Salem State, Fontaine was a part of three MASCAC championship teams and batted .340 as a senior in 2017.