PHOENIX, Ariz. — It seems everyone is soliciting donations for Nov. 30’s Giving Tuesday, the global generosity movement that falls each year on the Tuesday after Thanksgiving. Created in 2012 as a philanthropic response to consumerism and the buying frenzy of Black Friday and Cyber Monday, Giving Tuesday unleashes the power of everyday people to tackle seemingly unsolvable problems.

The question for many is: Which nonprofit deserves support?

For Annette Medina, the mother of Emma, a sixth-grader with a rare disorder, the obvious choice for Giving Tuesday donors is the Center for Rare Childhood Disorders (the Center) at the Translational Genomics Research Institute (TGen), an affiliate of City of Hope. 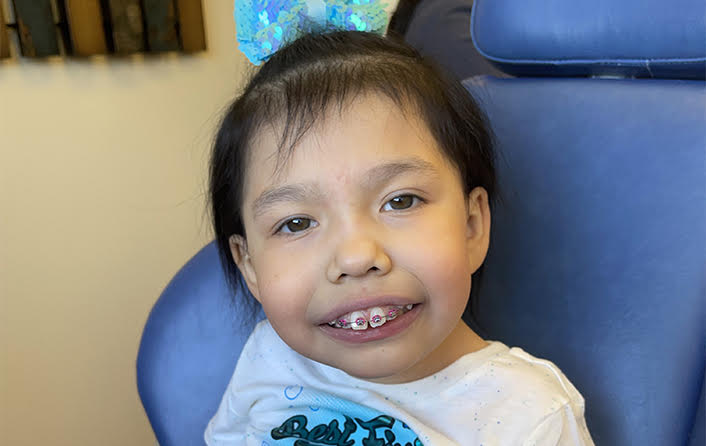 “In her head, she’s 11 years old, but physically she looks more like 5 or 6,” said Annette, when describing her daughter, whose condition revealed itself at age six months as she fell behind in her growth milestones. “It was kind of hard and frustrating.”

Soon after, she could not sit up without support, wasn’t crawling, walking or talking. Neither her doctors, geneticists, feeding specialists or physical therapists could explain what was wrong.

One phone call changed everything

After watching a TV news segment on the Center, an aunt suggested that Annette enroll in a study that examined the genetic code of Emma and her family. Initially, sequencing failed to reveal an answer, but TGen refused to give up. During a routine case review, TGen matched the genomic information from Emma’s sequence with a newly discovered genetic variant in the gene BRF1. The family had a diagnosis, cerebellar facial dental syndrome, an extremely rare disorder.

While currently no treatment exists, the diagnosis meant a great deal to the family and, as importantly, provided a foothold to the future.

“We had an answer. There was a reason. That, in itself, was comforting to us,” said Annette, who has since linked up with other families facing the same challenges. “We’re all going through the same struggles as families. We’re realizing that we’re not alone, and that’s huge. Getting that validation, that was a really big thing.”

Discovery leads to awareness and hope

Emma’s diagnosis is now part of a TGen Center case study recently published in the American Association for Pediatric Ophthalmology and Strabismus, which could lead to more awareness of the disorder and in time lead to treatments, perhaps even a cure.

“I tell everyone I know about TGen and what they did for us, because awareness is huge. They (TGen researchers) are part of our family now. They helped us through one of the roughest times in our lives,” Annette said. “Science is expensive, but life is valuable. To help individuals improve the quality of their lives, I don’t think you can put a price on that.”

Dr. Vinodh Narayanan, the Center’s Medical Director, said the challenges posed by young patients at the Center are among the most difficult in medicine, since families often arrive at the Center with just a collection of symptoms, looking for any clues about what is wrong with their children.

“These cases are usually mysterious at first, but sequencing often allows us to provide these families with a diagnosis that can lead to therapies and a better life for their children,” Dr. Narayanan said.

To help the hundreds of cases like Emma’s that TGen’s Center is trying to solve, please join Giving Tuesday by visiting TGen at: https://give.tgen.org/campaign/tgens-giving-tuesday/c374250.

About TGen, an affiliate of City of Hope
Translational Genomics Research Institute (TGen) is a Phoenix, Arizona-based nonprofit organization dedicated to conducting groundbreaking research with life-changing results. TGen is affiliated with City of Hope, a world-renowned independent research and treatment center for cancer, diabetes and other life-threatening diseases: CityofHope.org.  This precision medicine affiliation enables both institutes to complement each other in research and patient care, with City of Hope providing a significant clinical setting to advance scientific discoveries made by TGen. TGen is focused on helping patients with neurological disorders, cancer, diabetes and infectious diseases through cutting-edge translational research (the process of rapidly moving research toward patient benefit). TGen physicians and scientists work to unravel the genetic components of both common and complex rare diseases in adults and children. Working with collaborators in the scientific and medical communities worldwide, TGen makes a substantial contribution to help our patients through efficiency and effectiveness of the translational process. For more information, visit: tgen.org. Follow TGen on Facebook, LinkedIn and Twitter @TGen.