The son of Vitaliy Svichynskyi and Maria Svichynska was nearly two months old when he suddenly started to lose the ability to move.

The family soon learned their baby boy Dmytro was born with Spinal Muscular Atrophy (SMA) Type 1, the most severe type of the rare genetic disorder found in one of 10,000 babies born worldwide.

The disorder only gets worse over time without treatment, causing muscle weakness and affecting a child’s movement and breathing abilities, often leading to death.

The only medicine that can change that is Zolgensma, the world’s most expensive drug and the first gene therapy approved for the SMA treatment.

Dmytro needs a single dose of the drug that costs $2.3 million.

Not only it’s an immense sum for the family from Odesa, a city of 1 million people 476 kilometers south of Kyiv, they are also limited by time. For the treatment to be effective, Dmytro needs to get a dose of Zolgensma before he turns six months old.

Now that Dmytro is four months old, it’s a race against time for his family.

On a mission to save their son, the parents fight tooth and nail. They have launched campaigns and flashmobs involving volunteers and public figures to spread the word about Dmytro’s disease and raise the needed sum.

“The longer we wait, the more motor neurons that conduct impulses throughout the body will die,” Svichynskyi said. “The child may be left with a disability or even die.”

SMA is a progressive neurodegenerative disease caused by a defective gene. It kills nerve cells, making a child’s muscles lose their tone. That causes difficulty with swallowing or breathing.

Although there are several types of the disease, Type 1, which Dmytro was diagnosed with, is both the most severe and most common type of SMA. The symptoms usually occur within the first months of a child’s life.

According to the U.S. Food and Drug Administration, most children with this disease don’t survive past early childhood due to respiratory failure.

“There was no treatment before 2018, and all of those kids were dying in palliative care institutions,” Svichynskyi said to Channel 7.

Zolgensma was designed to change that.

Approved by the U.S. Food and Drug Administration in 2019, Zolgensma is the first gene therapy made to treat SMA and one of the first approved gene therapy treatments.

It replaces the function of a child’s missing gene by delivering a functional copy of an SMN1 gene into the child’s target motor neuron cells that lead to better muscle function and mobility.

In order to save a child’s life, Zolgensma should be administered only once. But the price for the treatment makes it unattainable for most Ukrainians.

Although there is no official registry of the number of the SMA patients in Ukraine, the National Assembly of People with Disabilities of Ukraine reports that as of 2020, there were 267 patients diagnosed with SMA in Ukraine, 90% of whom are children under 14.

These patients can’t rely on government help with treatment.

In a comment with the Lb.ua media outlet, Olga Stefanyshyna, former deputy health minister and member of the parliamentary health committee, said that such rare diseases are always the most expensive and difficult programs for every country to provide.

According to her, there are currently only a few government programs under which the medicine for orphan or rare disease patients is purchased by the state. But the treatment from SMA is not on the list because of its cost.

“This is an unaffordable amount for both relatives and so far for the state budget. After all, the deficit of funding in medicine is about Hr 100 billion for all programs,” Stefanyshyna told Lb.ua.

Stefanyshyna also said that the health ministry and the agency for purchasing drugs should negotiate with the manufacturers to reduce the prices for such medications. According to her, some legislative changes are currently being drafted in the parliament aiming to provide the state with needed tools for such negotiations.

But with no state help at the moment, the families of children diagnosed with SMA are alone in this battle.

Despite being in a desperate situation, parents of children diagnosed with SMA do not give up. Luckily, there are some happy endings.

In February this year, eight-month-old Maria Sakhno became the first Ukrainian who was treated with Zolgensma.

Another Ukrainian, one-year-old Yelysei Zelensky has received Zolgensma for free. He was among the winners of a global lottery by Novartis, the Swiss multinational drug company behind the development of Zolgensma. Although the lottery was criticized for the emotional effect that those who lose might face, the boy received the long-awaited treatment on April 6, and with it, a chance to live.

“Another significant day in our life! Emotions of happiness, joy and anxiety overwhelm us!” his mother, Karina Zelenska, wrote on Instagram after the injection. “There is a long course of recovery and rehabilitation ahead,” she said.

Besides Dmytro, many other Ukrainian families are currently raising money to get Zolgensma, including eleven-month-old Amelia Mishchenko from Nikopol, a city in Dnipropetrovsk Oblast,  Nikita Kryzhnyi, a nearly two-year-old boy from Kyiv, and one-year-old Kirill Kondrashev from Donetsk Oblast.

All of them hold online campaigns to attract the public’s attention and raise the needed funds for treatment.

The “Save Dmytro” campaign has started soon after the boy’s parents learned about the diagnosis. It went viral immediately. 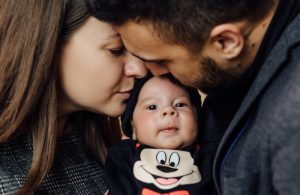 Thousands of people from all over Ukraine started sharing Dmytro’s story and donating money, including opinion leaders such as filmmaker Oleg Sentsov and journalist Mykhailo Tkach.

Ukrainian musicians, athletes, influencers and entrepreneurs are also taking part in the flashmob called “Dating Auction For Dima,” where they offer to spend time and share their expertise with people in exchange for their donations.

Dmytro’s parents have also launched “Cookies for Dima” flashmob, in which they ask people to bake cookies that look like clocks, symbolizing the time that their boy is running out of. Those who bake cookies, share pictures of them online, spread the word, donate and challenge others to join the flashmob and the fundraiser.

“Let’s do a good deed together. Let’s save the child’s life,” Pavlik said during the program.

Although Dmytro is still unable to lift his arms or legs because of the disorder, the family has high hopes that after treatment, their baby boy will have a chance at preserving muscle strength. So raising the money is the front and center of their focus now.

“For one family, this amount of money is unbearable, but if each of us at least once refuses a cup of coffee, a burger, a piece of cake or popcorn and transfers Hr 65 (over $2) to help, we can, and most importantly will have time to save Dima,” the campaign’s Facebook post reads.