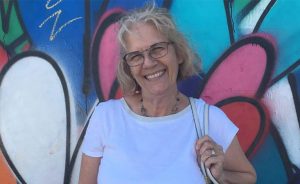 At the end of 2011, I experienced an acute episode of diarrhea and vomiting for hours. I had returned home from New York City, consuming pasta with bacon bits and drinking a few glasses of red wine. By morning, I seemed better and went about my day caring for family, failing to visit a hospital or my doctor in the days that followed, assuming food poisoning.

I had a history of acid reflux, antacid use and fatty liver. I developed more symptoms: burping every 45 seconds when I lay down, chronic constipation, high cholesterol, hypothyroidism, bloating, hair loss, wheezing, fatigue, excessive thirst, back pain with a gait disturbance, falls, itching and a rectocele (herniation, or bulge, in the rectal area). Tests showed elevated levels of BUN (blood urea nitrogen) and CA-125, and four abdominal ultrasounds where my pancreas was obscured. I had one abdominal CT without contrast and one MRI. I had other tests, including a blood test for Rocky Mountain Spotted Fever, a rare disease affecting about 600 people a year. I mention that as pancreatic cancer is not that rare, affecting about 60,000 Americans a year.

My general practitioner in Virginia thought the CA-125 result was a sign of ovarian cancer.  Scans of that area did not correlate, although one gynecologist urged me to have a prophylactic oophorectomy and hysterectomy. One gastroenterologist at a prestigious university hospital near Baltimore suggested I get another opinion for that surgery. He also told me to keep eating popcorn and taking my baby colic ease that helped me to sleep at night while burping.

I visited eight gastroenterologists, three general practitioners and two gynecologists plus other specialists. Not one articulated the word “pancreas.”

For two years, I was busy traveling to California to help my son. In March of 2020, I had vague stomach pains, fatigue and bright yellow urine, and I realized I should see another doctor.

I was misdiagnosed two more times before discovery. The first visit was at a walk-in clinic where I was prescribed the antibiotic Cipro. The next day, I visited an urgent care clinic where they told me I had “big bilirubin” and then took bloodwork. The third day, my husband and I reviewed the electronic record, and my liver enzymes were extremely elevated along with a note from the doctor: “Come back in for a scan, nothing serious.” We drove to the ER instead.

I presented with jaundice in the emergency room, where I had the “aha” moment.  My “mystery” illness had a name – adenocarcinoma of the pancreas in the head of the pancreas, with a blocked bile duct requiring emergency surgery.

Positioned in a perfect place in Los Angeles at the time, my healthcare was addressed by skilled doctors. My blocked bile duct was stented, as I awaited surgery to remove the tumor. My Whipple was done by a surgeon who had done approximately 1,200 Whipple surgeries.

I am currently under the care of an oncologist, showing good response to chemo.

My symptoms were cured by my treatments. I will continue to fight with every cell in my body to stay alive and spread the word that pancreatic cancer is not always “the silent killer.” Learning symptoms can help. I am blessed to have found centers of excellence, where they fixed my broken pieces and made me whole again.