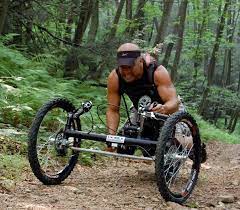 For decades they have been looking for the few and the proud. In Chris Kaag, the Marines found such a man.

A Marine is a Marine. There is no such thing as a former Marine, according to the 35th Commandant of the Marine Corps, Gen. James F. Amos. When your days in uniform are over, you’re still a Marine, Amos says. You went through Parris Island, San Diego or the hills of Quantico and you made yourself into one of the few and the proud. A Marine is what you’ll be forever.

Meet Chris Kaag. He’s a Marine. He’s been gung-ho since he was seven years old. Being a member of the Corps runs deep in his family bloodlines and it was all he ever wanted to be. Chris became a Marine in 1994. The path was full of challenges and difficulties, but he made it off Parris Island and was a different person because of it.

“My dad, my grandfather, my uncle and my brother after me were all Marines. I grew up hearing Marines stories. I looked up to my Dad a lot,” Chris said. “When I was seven year old, I remember going to the mall and buying a Marines license plate. I wrote letters to the Marine Commandant. I really wanted to be a Marine.”

Today, Chris is in his mid-40s and a lot has changed in his life. At the age of 21, he faced his ultimate defining moment when he was diagnosed with adrenomyeloneuropathy (AMN), a rare and genetic degenerative nerve condition that has a laundry list of physical and cognitive impacts. In Chris’ case, AMN ultimately took away his ability to walk.

No matter what AMN might have robbed Chris of physically and mentally over the course of nearly a quarter century since his diagnosis, it hasn’t changed the way he approaches life.

That voice in his head, the one that belongs to drill instructor Sgt. Hart from basic training, is still crystal clear all these years later.

Chris never quit on himself then when DI Hart was barking into his face. The pure joy of accomplishment and not letting anybody down in the process, including himself, was a point of great pride.

Little did Hart know that his five simple words from Parris Island would become part of a movement inspired by Chris. The Penn State graduate lost the ability to actively serve his country in uniform to a rare disease. Since that day, he’s spent his life looking for ways to help and serve others.

You don’t have to wear a uniform to have honor.

“All I’m trying to do is motivate others, disabled and able bodied, to redefine the way they view their own personal challenges,” said Chris. “We all have obstacles, but it is how we respond that makes us who we are.”

Chris, who says he was a lazy kid growing up despite his passion to become a Marine, was in no shape for boot camp. He arrived at Parris Island a “fat ass and lazy SOB,” he says. Three demanding months on The Island flipped that script in a hurry.

After boot camp Chris embarked on a career in avionics and was enjoying life overseas assigned to duty in Italy. One day while out on a run, he noticed a drag in his feet that he had not experienced before and that was the initial step on what would become his new life journey.

AMN struck quickly after Chris began to show symptoms at the age of 21. Like many rare disease patients, it took a litany of tests and potential diagnoses to nail down exactly what he was facing. He spent nine weeks at Walter Reed Hospital in Washington D.C. before finally getting some mental relief with his AMN diagnosis.

The disease impacted him at a rapid pace. He went from walking with a cane to using two canes and finally was in a wheelchair within five years of his diagnosis. He wasn’t even 30 years old yet and already the life he had come to love and adore wearing the uniform as a United States Marine seemed like a very distant memory.

“I have had my share of bad days. We all do, and I still have mine,” said Chris. “I fought getting into a chair for a long time. I used to walk with two canes for too long of a time. I wanted to use my legs as long as I could. When I finally got into a chair, I wondered why it took me so long.”

Following his medical discharge from active duty, Chris returned home to Pennsylvania to “figure some things out” and find ways to start moving forward.

He went to college at Penn State Berks and graduated with a business degree in 2004, but had trouble finding the right job.

Enter his time and training in the Corps.

One of the core values of the Marines is when you find yourself in a tight spot, it is incumbent on you to find a way to improvise, adapt and overcome to find a solution.

Deep down Chris knew he was a servant leader. His life mission to use his knowledge and training to help and serve others tugged at him. It was time to improvise, adapt and overcome.

“I really don’t know why I was blessed to have the attitude I do to get over things,” Chris said. “I just try to reassure people that there are opportunities. And there is hope. You just have to find the right people to help, whether that’s me or somebody else. Each life is different.

“I’m the happiest SOB you’re going to meet. Just because I’m in a chair, don’t judge me or think I’m not living my best life. That’s the kind of confidence and can-do attitude I want to give to everybody.”

Armed with his Penn State degree, but unable to find a job that met his desire to serve others, Chris started his own business – Corps Fitness – out of the back of his pickup truck in 2004. Being a desk jockey just wasn’t his cup of tea.

Chris’ dream job of becoming a Marines Corps Drill Instructor couldn’t happen, but he could lead people on a life journey of fitness by becoming their instructor. Three years later, in 2007, he added another layer by starting the IM ABLE Foundation to go along with Corps Fitness.

His foundation seeks to transform lives by removing obstacles for those diagnosed with physical, cognitive, or behavioral challenges by being physically active and redefining what is possible.

IM ABLE is focused on providing adaptive equipment to those in need. They started off by providing hand cycles, with a price tag anywhere from $2,000 to $10,000. And over the years they have adapted to the expanding market of equipment available, including mountain bikes and adaptive skis, for example.

Today, IM ABLE has roughly 20 pieces of adaptive equipment available for individuals to give a test run. Chris also expanded what his foundation does by connecting veterans, especially those with PTSD, with some of his adaptive youth. As you would expect, military veterans like himself hold a special place in his heart.

Chris has spent more than two decades improvising, adapting and overcoming. He didn’t let his rare challenges stop him from being the leader he was born to be, and refused to let his rare disease define him. Instead, Chris defined himself through his rare disease.

He found a way to be a leader and teacher through physical fitness and sport and by doing so has served as an inspiration of what is possible. His foundation serves as a vehicle of hope for those who face physical or mental hurdles. Chris believes anything is possible, has proven it, and is keen on sharing that core belief with as many people as possible..

Looking back, Chris, who has been married to his wife Gretchen for more than a decade with whom he shares their son Carter, realizes he always wanted to please others and was most happy helping people feel good about themselves. It was the part of who he is that needed to be nurtured and harvested to be fully realized.

Being a United States Marine, even his short stint on active duty, and being diagnosed with a genetic rare condition that changed the course of his life have blended to bring Chris’ passion and purpose front and center.

“While I don’t wear the Marine Corps uniform anymore, I still am a Marine,” Chris said. “I still am serving. I still dedicate my life to helping as many people as I can.”

There are no former or ex-Marines. Chris is still just a Marine.

Chris has spent more than two decades improvising, adapting and overcoming. He didn’t let his rare challenges stop him from being the leader he was born to be, and refused to let his rare disease define him. 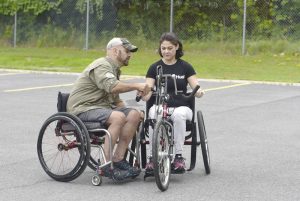