CAMBRIDGE, Mass. and TARRYTOWN, N.Y. – Intellia Therapeutics, Inc.(NASDAQ:NTLA) and Regeneron Pharmaceuticals, Inc. (NASDAQ:REGN) today announced positive interim data from an ongoing Phase 1 clinical study of their lead in vivo genome editing candidate, NTLA-2001, which is being developed as a single-dose treatment for transthyretin (ATTR) amyloidosis. The Phase 1 study, run by Intellia as the program’s development and commercialization lead, is evaluating NTLA-2001 in people living with hereditary transthyretin amyloidosis with polyneuropathy (ATTRv-PN). NTLA-2001 is the first CRISPR/Cas9-based therapy candidate to be administered systemically, via intravenous infusion, for precision editing of a gene in a target tissue in humans. NTLA-2001 is designed to inactivate the TTR gene in liver cells to prevent the production of misfolded transthyretin (TTR) protein, which accumulates in tissues throughout the body and causes the debilitating and often fatal complications of ATTR amyloidosis. The interim data were presented today at the 2021 Peripheral Nerve Society (PNS) Annual Meeting and published in The New England Journal of Medicine (nejm.org/doi/full/10.1056/NEJMoa2107454.)[1].

“These are the first ever clinical data suggesting that we can precisely edit target cells within the body to treat genetic disease with a single intravenous infusion of CRISPR. The interim results support our belief that NTLA-2001 has the potential to halt and reverse the devastating complications of ATTR amyloidosis with a single dose,” said Intellia President and Chief Executive Officer John Leonard, M.D. “Solving the challenge of targeted delivery of CRISPR/Cas9 to the liver, as we have with NTLA-2001, also unlocks the door to treating a wide array of other genetic diseases with our modular platform, and we intend to move quickly to advance and expand our pipeline. With these data, we believe we are truly opening a new era of medicine.” 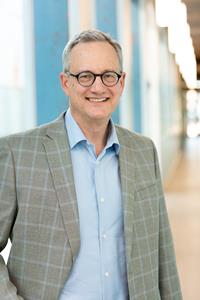 The interim data released today cover the first six ATTRv-PN patients across two single-ascending dose cohorts of the Phase 1 study, which is currently being conducted in the United Kingdom and New Zealand. Single doses of either 0.1 mg/kg or 0.3 mg/kg of NTLA-2001 were administered systemically. Reductions in serum TTR levels were measured from baseline to day 28. Treatment with NTLA-2001 led to dose-dependent reductions in serum TTR, with mean reductions of 52% among the three patients in the 0.1 mg/kg dose group, and 87% among the three patients in the 0.3 mg/kg dose group, including one patient with a 96% reduction. By contrast, the standard of care for ATTRv-PN, which requires chronic treatment, typically yields TTR reductions of approximately 80%.

“This is exciting early data both for people living with this devastating disease and for the entire scientific community working to maximize the potential of genetics-based medicines through cutting-edge research and technologies,” said George D. Yancopoulos, M.D., Ph.D., President and Chief Scientific Officer of Regeneron, which first partnered with Intellia in 2016 to advance CRISPR/Cas9 gene-editing technology for in vivo therapeutic development. “Thanks to large-scale human genetics research, there have been many new genetic targets identified and confirmed to have an impact on human health. Combining this knowledge with the precision and enhanced convenience of a single CRISPR infusion unlocks new possibilities in treating – and potentially even curing – life-threatening and historically difficult-to-address diseases.”

At both dose levels, NTLA-2001 was generally well-tolerated by the six patients included in the interim analysis, with no serious adverse events and no liver findings by day 28. Given the safety and tolerability profile so far, NTLA-2001 is continuing to be evaluated in the dose-escalation portion of the study, to determine if a higher dose could result in a deeper reduction in disease-causing protein levels leading to the potential for more meaningful clinical benefit. As of the date of this release, Cohort 3, evaluating NTLA-2001 at the 1 mg/kg dose level, is actively enrolling.

Following the identification of a recommended dose in the dose-escalation portion of the study, Intellia expects to begin a single-dose expansion cohort in Part 2 of the Phase 1 trial later this year. After completion of the Phase 1 trial, the company plans to move to pivotal studies for both polyneuropathy and cardiomyopathy manifestations of ATTR amyloidosis.

“ATTR amyloidosis is a progressive and fatal disease that usually requires chronic, lifelong treatment. These interim Phase 1 data support NTLA-2001 as the only one-time treatment either on the market or in development,” said Julian Gillmore, M.D., Ph.D., Professor of Medicine, National Amyloidosis Centre, UCL Division of Medicine, Royal Free Hospital, U.K., and the Phase 1 study’s national coordinating investigator. “As the first-ever systemically administered CRISPR therapy candidate, NTLA-2001 shows strong potential to stop the production and accumulation of the misfolded TTR protein by inactivating the TTR gene at the root of the disease. This approach could deliver life-changing, lifelong benefits to patients with all forms of ATTR amyloidosis, who continue to experience debilitating symptoms and complications of disease while on the standard of care. While further investigation is needed, these results are highly encouraging.”

Intellia intends to present additional data from the study at a medical or scientific meeting later this year.

Based on Nobel Prize-winning CRISPR/Cas9 technology, NTLA-2001 could potentially be the first curative treatment for ATTR amyloidosis. NTLA-2001 is the first investigational CRISPR therapy candidate to be administered systemically, or through a vein, to edit genes inside the human body. Intellia’s proprietary non-viral platform deploys lipid nanoparticles to deliver to the liver a two-part genome editing system: guide RNA specific to the disease-causing gene and messenger RNA that encodes the Cas9 enzyme, which carries out the precision editing. Robust preclinical data, showing deep and long-lasting transthyretin (TTR) reduction following in vivoinactivation of the target gene, supports NTLA-2001’s potential as a single-administration therapeutic. Interim Phase 1 clinical data released in June 2021 confirm substantial, dose-dependent reduction of TTR protein following a single dose of NTLA-2001. Intellia leads development and commercialization of NTLA-2001 as part of a multi-target discovery, development and commercialization collaboration with Regeneron.

About the NTLA-2001 Clinical Program

The global Phase 1 trial is an open-label, multi-center, two-part study of NTLA-2001 in adults with hereditary transthyretin amyloidosis with polyneuropathy (ATTRv-PN). The trial’s primary objectives are to assess the safety, tolerability, pharmacokinetics and pharmacodynamics of NTLA-2001. Patients receive a single dose of NTLA-2001 via intravenous administration. The study will enroll up to 38 participants (ages 18-80 years) and consists of a single-ascending dose phase followed by a dose-expansion phase, which is expected to begin later in 2021. Visit clinicaltrials.gov (NCT04601051) or eudract.ema.europa.eu/ (2020-002034-32) for more details. 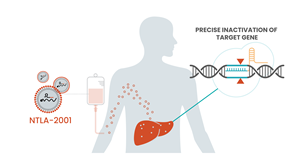 Enrollment is ongoing at clinical trial sites in the U.K. and New Zealand, and Intellia is submitting additional regulatory applications to support a planned global study expansion. After completion of the Phase 1 trial, the company plans to move to pivotal studies for both polyneuropathy and cardiomyopathy manifestations of ATTR amyloidosis.

Transthyretin amyloidosis, or ATTR amyloidosis, is a rare, progressive and fatal disease. Hereditary ATTR (ATTRv) amyloidosis occurs when a person is born with mutations in the TTR gene, which causes the liver to produce structurally abnormal transthyretin (TTR) protein with a propensity to misfold. These damaged proteins build up as amyloid in the body, causing serious complications in multiple tissues, including the heart, nerves and digestive system. ATTRv amyloidosis predominantly manifests as polyneuropathy (ATTRv-PN), which can lead to nerve damage, or cardiomyopathy (ATTRv-CM), which can lead to heart failure. Some individuals without the genetic mutation produce non-mutated, or wild-type TTR proteins that become unstable over time, misfolding and aggregating in disease-causing amyloid deposits. This condition, called wild-type ATTR (ATTRwt) amyloidosis, primarily affects the heart. There are an estimated 50,000 people worldwide living with ATTRv amyloidosis and between 200,000 and 500,000 people with ATTRwt amyloidosis. 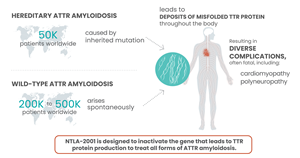 Intellia Therapeutics, a leading clinical-stage genome editing company, is developing novel, potentially curative therapeutics using CRISPR/Cas9 technology. To fully realize the transformative potential of CRISPR/Cas9, Intellia is pursuing two primary approaches. The company’s in vivo programs use intravenously administered CRISPR as the therapy, in which proprietary delivery technology enables highly precise editing of disease-causing genes directly within specific target tissues. Intellia’s ex vivo programs use CRISPR to create the therapy by removing, re-engineering and re-infusing the patient’s own cells to treat cancer and autoimmune diseases. Intellia’s deep scientific, technical and clinical development experience, along with its robust intellectual property portfolio, have enabled the company to take a leadership role in harnessing the full potential of CRISPR/Cas9 to create new classes of genetic medicine. Learn more at intelliatx.com. Follow us on Twitter  @intelliatweets.

Regeneron (NASDAQ: REGN) is a leading biotechnology company that invents life-transforming medicines for people with serious diseases. Founded and led for over 30 years by physician-scientists, our unique ability to repeatedly and consistently translate science into medicine has led to nine FDA-approved treatments and numerous product candidates in development, almost all of which were homegrown in our laboratories. Our medicines and pipeline are designed to help patients with eye diseases, allergic and inflammatory diseases, cancer, cardiovascular and metabolic diseases, pain, hematologic conditions, infectious diseases and rare diseases.

Regeneron is accelerating and improving the traditional drug development process through our proprietary VelociSuite® technologies, such as VelocImmune®, which uses unique genetically humanized mice to produce optimized fully human antibodies and bispecific antibodies, and through ambitious research initiatives such as the Regeneron Genetics Center, which is conducting one of the largest genetics sequencing efforts in the world.