The midfielder is auctioning off his signed match-worn shirt from Manchester City’s 2-1 win over Borussia Dortmund in the first leg of our Champions League quarter-final, with all proceeds being used to help fund Dilara Abanoglu’s life-saving surgery. 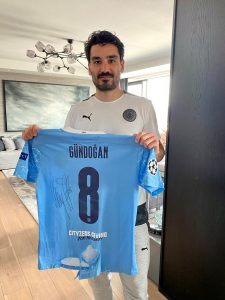 Dilara was diagnosed with Ollier’s Disease – a skeletal disorder which affects one in 100,000 people – during the first year of her life when doctors discovered a tumour in her left knee joint.

Due to its rarity and complexity, treating the disease is difficult and, if left untreated, Dilara may be required to have her leg amputated, but the money raised by Gundogan’s shirt auction will allow the youngster’s family to fund an operation in Turkey.

“There are very few doctors in the world who can operate Dilara,” explained City’s No.8.

“The important surgery will be realised in Turkey and is very costly. I want to use the initiative to support Dilara during this difficult time and make the operation possible for her.

“At the same time fans are offered the opportunity to buy something special at auction.”

This is the latest charitable act from Gundogan, who launched a similar auction in January to provide financial support to Manchester businesses that were struggling with the impact of the COVID-19 pandemic.

The German international is also Official Ambassador for social care charity, Community Integrated Care and donated Christmas presents to participants in December, whilst he marked his 30th birthday in October of last year by making socially distanced visits to people supported by the charity.

To find out more about the auction in aid of Dilara’s operation, please visit charitystars.com.