The impact of such results on patients is demonstrated by increases in the self-reported quality of life (QoL) scores at Year 4 vs. baseline. Mean overall QoL increased by a clinically meaningful magnitude relative to baseline, driven by clinically meaningful increases in the sub-scores corresponding to mental health and the ability to carry out activities autonomously (e.g., role difficulties, dependency, near and far activities, general vision).

“The RESTORE findings underline the therapeutic value of GenSight’s pioneering one-time treatment for LHON: durable and clinically significant improvement in visual function coupled with impressive safety,” noted Bernard Gilly, Co-founder and Chief Executive Officer of GenSight. “The body of evidence we have now accumulated is without doubt good news for patients needing an urgent solution for their brutal blinding condition, and consequently we are continuing to work vigorously with the relevant authorities to bring regulatory review process to a successful conclusion.”

RESTORE is one of the largest long-term follow-up studies for a rare disease treatment, with 62 subjects accepting the invitation to enroll. All subjects, who were affected by LHON caused by a mutated ND4 mitochondrial gene, were treated with an intravitreal injection of LUMEVOQ® in one eye and with sham injection in the other.

Note: The RESTORE sample consists of the RESCUE and REVERSE participants who accepted to be followed in the long-term follow-up study. Year 4 values were the LogMAR readings nearest to 1461 days post treatment recorded between 1461 +/- 273 days post- treatment. Missing values were imputed using the Last Observation Carried Forward (LOCF) method. *Nadir = worst best-corrected visual acuity recorded from baseline to Year 4. ** Assessments of best-corrected visual acuity (BCVA) were recorded in LogMAR. The change from nadir in LogMAR was converted to “letters equivalent” improvement by multiplying the LogMAR by -50 (ref. J.T. Holladay, J Refrac Surgery, 1997;13, 388-391).

Responder analyses at Year 4 indicate that improved BCVA was a benefit for a substantial proportion of the study participants. 71.0% of RESTORE subjects achieved Clinically Relevant Recovery (CRR) [4] against nadir four years after treatment, and 80.7% of them had on-chart vision (BCVA ≤ 1.6 LogMAR) in one or both eyes.

Viewed against the trend in vision typically seen in untreated patients [5], the findings represent a significant departure from the natural progression of LHON. 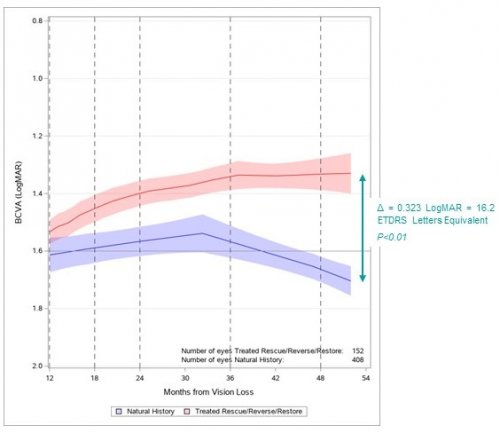 Note: The Locally Estimated Scatterplot Smoothing (LOESS) curves show the evolution, from 12 months to 52 months after onset of vision loss, of the mean BCVA in all eyes (LUMEVOQ®– and sham-treated) from REVERSE / RESCUE / RESTORE studies and all eyes from a matched cohort of patients not treated with LUMEVOQ®. The shaded areas represent the 95% confidence interval for the mean BCVA. The values >52 months were set to 52 months. The curve starts at 12 months after onset when 92.7% of eyes in RESCUE and REVERSE had received treatment, either with LUMEVOQ® or a sham injection. The untreated cohort consisted of 208 ND4-LHON patients that were followed in the REALITY registry and from two prospective and eight retrospective natural history studies.[6]

The review of the European Marketing Authorisation Application for LUMEVOQ® is ongoing, with the decision from the CHMP expected in Q4 2022.